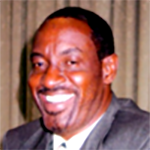 Rev. Desmond Austin has been serving as the EAC’s Second Vice President since 2009 and has also been the President of the Trinidad and Tobago Council of Evangelical Churches (TTCEC), a member body of the EAC, since 2008.

He currently holds a Diploma in Pastoral Ministries from the Open Bible Institute of Technology and a B.A. in Pastoral Studies from the Caribbean College of the Bible International and is currently pursuing an M. Litt. in Family Life Education at the Omega Advance School for Integrated Studies.

Rev. Austin has his ministry roots on the Open Bible Standard Churches of Trinidad and Tobago (OBSCTT), itself a member of the TTCEC. He began in 1979 as a Sunday School teacher in Sea Lots and pioneered an outpost church there in 1983, becoming Pastor of the Sea Lots Open Bible Church. Two years later, he became a credentialed minister of the Open Bible and continued as Pastor of Sea Lots until 1988, when he became Senior Pastor of the Tunapuna Open Bible Church, known as “Church on the Way,” and has remained there ever since. He was also an integral member of the team, which launched two Open Bible churches in Febeau and La Canoa.

He has continued his involvement in Sunday School ministry and has been on the OBSC TT’s National Board as Christian Education Director for the past ten (10) years. He delights in investing in the growth of children; also serves as Board Chairman of the El Dorado East Secondary School. He is also involved in training future ministers of the Gospel and has been a lecturer at the Open Bible Institute of Theology since 1983

Rev. Austin met his wife, Carol, during his time in Sea Lots and identifies it as a high point of his ministry. They have been happily married since 1987 and together have one son, Josiah.