Greetings in the name of our Lord and Saviour JESUS CHRIST. We invite you to join us in prayer on Thursday, December I, 2022, under the theme 'Bring everything to GOD in prayer and supplication'. Philippians 4:6 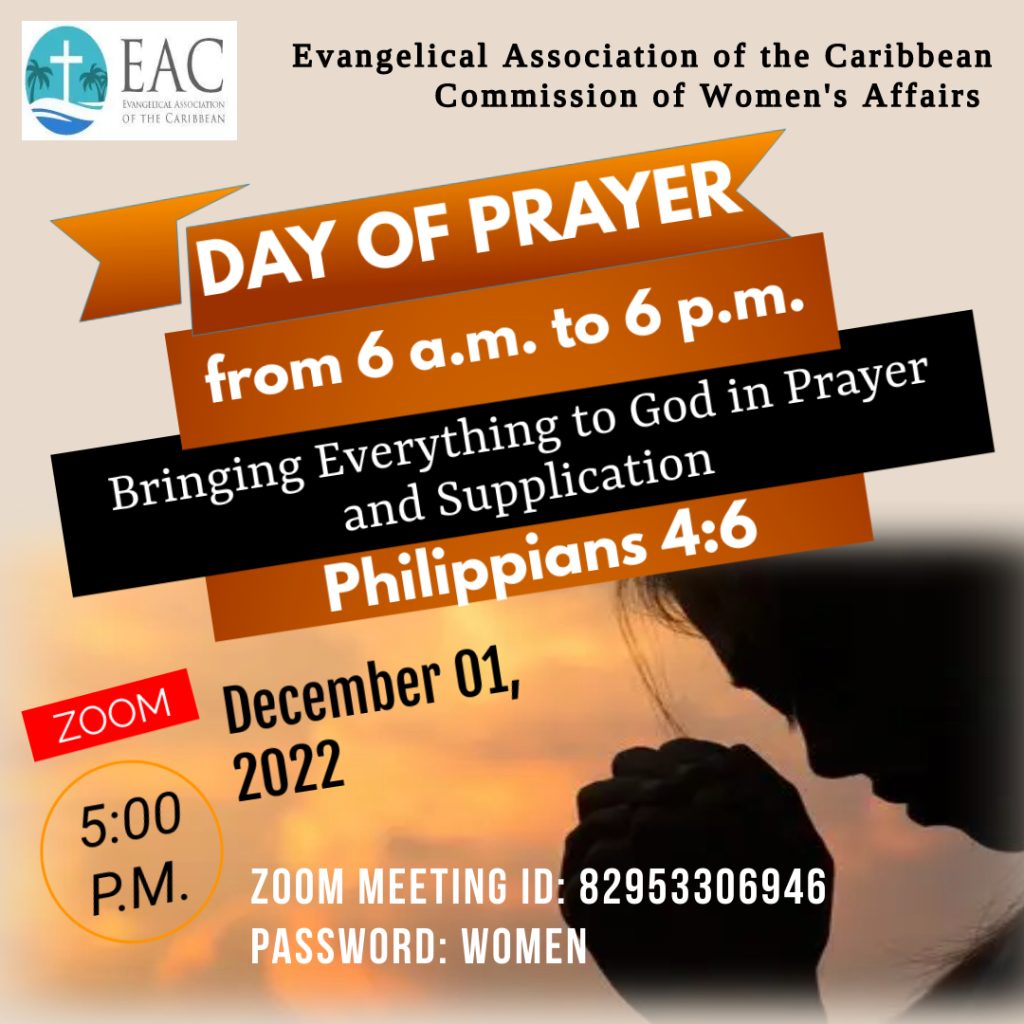 We request that prayers be done from 6:00 to 18:00 hours and be focused on the prayer points listed below.

1. For Caribbean Church Leaders who are committed and lead like Jesus. For a mighty spiritual Revival across the Caribbean.

2. Pray against gun violence. For the families who are mourning the loss of those who have been gunned down or are imprisoned as a result of gun violence. For communities to find solutions to bring an end to the violence.

3. Protection of children from all types of abuse-sexual, physical, mental, emotional or verbal. That Churches and their leadership will acknowledge the importance of Child Protection Policies.

4. Spiritual guidance for all educational stakeholders as they lead and empower our children and young adults.

5. Pray for unity, strength and wisdom across all denominations especially among the leaders. They all one in Christ Jesus.

6. Pray for miracles for those suffering from cancer and are getting chemotherapy. For faith to arise believing Jehovah Rapha is still healing.

7. For peace and comfort against anxiety, fear and doubt. Holding to the knowledge of God as a promise keeper and provider.
8. Prayer for families to seek God to achieve solutions to conflict and financial challenges. For a return to respect and discipline to homes and schools.

9. Pray for our youth to stand firm on the biblical principles of marriage and gender as the only lifestyle to embrace.

Get your copy of the EAC Newsletter Today! 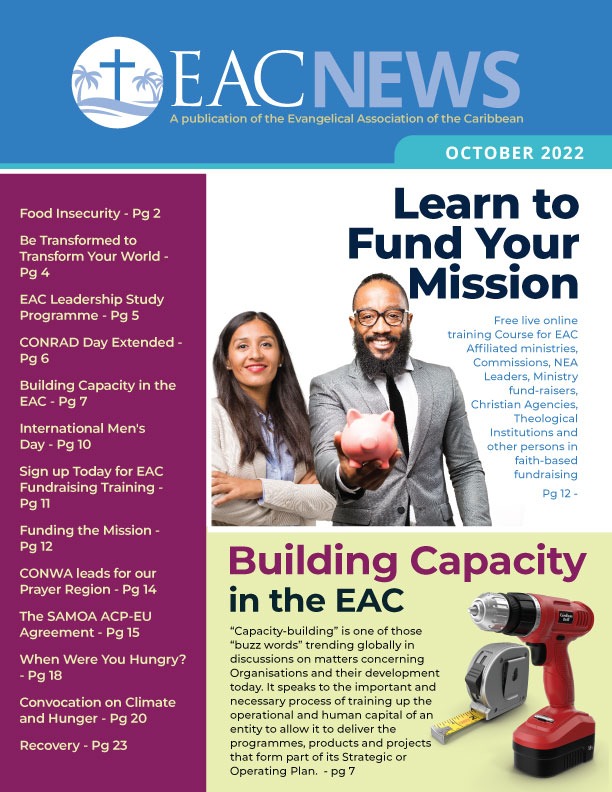 The Day of Prayer is scheduled to take place on Thursday October 27th at 6:30pm. It is on online meet and the zoom details are on the flyer below. 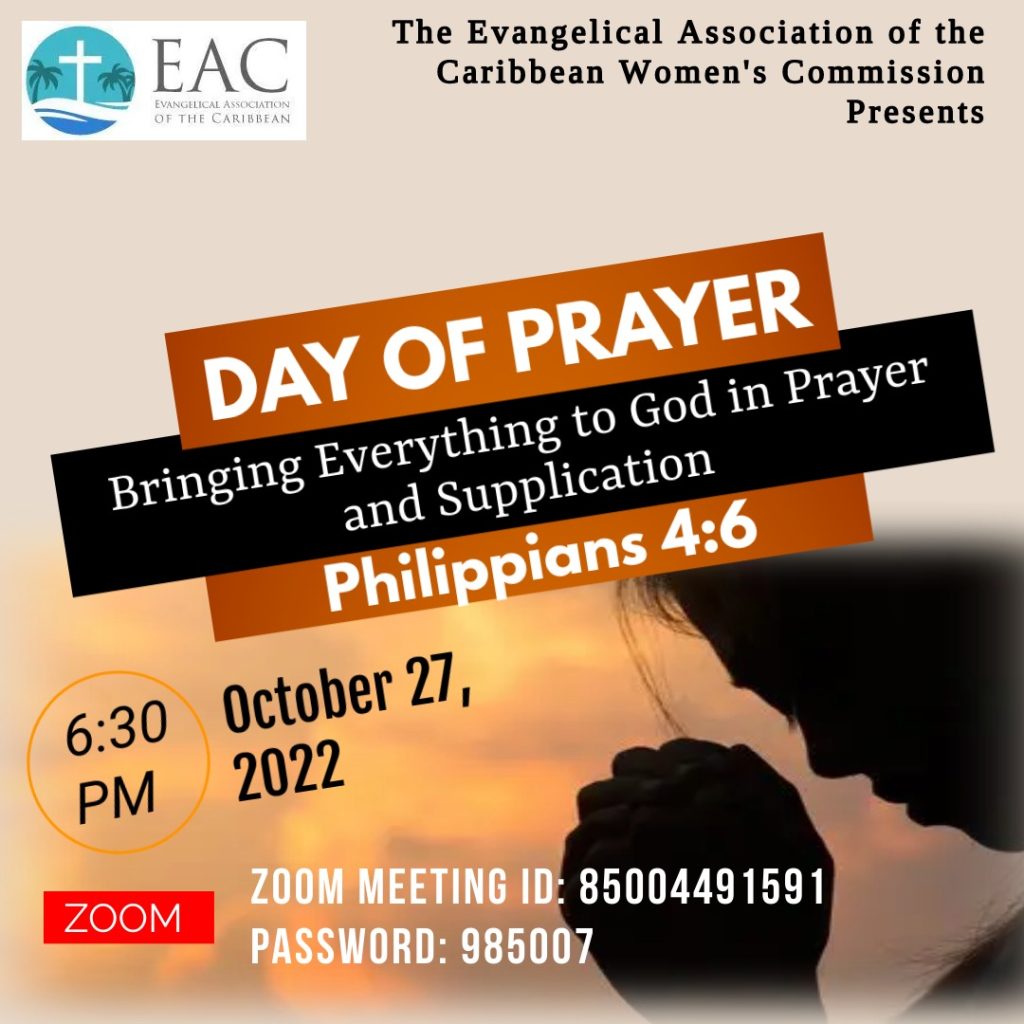 Get your copy of the EAC Newsletter Today! 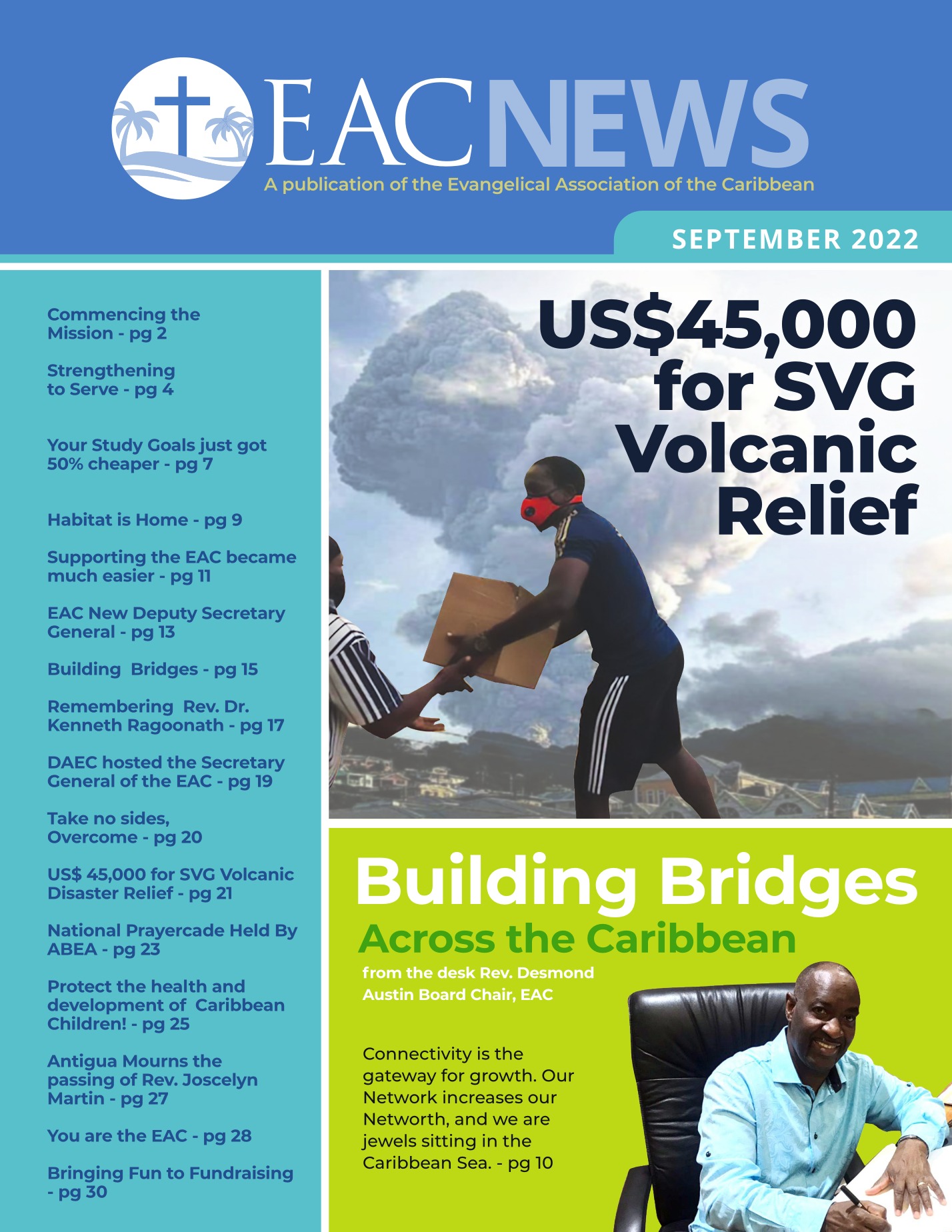 The Evangelical Association of the Caribbean (EAC), its National Evangelical Alliances, denominations, churches, members and agencies expresses its’ deepest condolences to the Royal Family, of the House of Windsor, who are mourning the passing of their mother, grandmother, and great-grandmother, HRH Queen Elizabeth II.

Furthermore, we express our sincere condolences to the peoples of the United Kingdom and colonies and the Commonwealth, on this the sad passing of their monarch and head, Queen Elizabeth II on the 8th September 2022.

We recognize the sense of dignity, unity and continuity that Queen Elizabeth II represented and the guidance that she gave to the United Kingdom of Great Britain. Her Majesty was one of the greatest leaders the world has ever known. As the longest-reigning monarch, with 70 years of service, her majesty Queen Elizabeth II was well-respected around the world as an outstanding leader and as a devoted Christian. 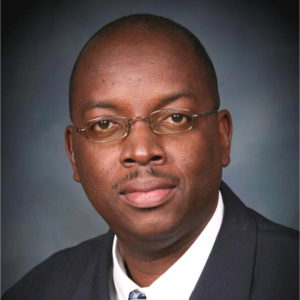 The Evangelical Association of the Caribbean EAC, has appointed its first ever Deputy Secretary General with responsibility for Development. Effective 1st June 2022, Mr. Clovis St. Romain of the EAC’s Antiguan affiliate has taken up the lead role in the Association’s newly created resource development department.

A former President of JCI West Indies and current Treasurer of the Antigua-Barbuda Evangelical Alliance (ABEA), Clovis brings to the EAC a wealth of experience in the business world, experience which he gained during more than thirty years in management level positions in companies operating in the commercial sectors in Guyana, St. Kitts Nevis and his adopted home of Antigua-Barbuda.

That experience will serve him well in this new role, where he will head up the EAC’s Fund-Raising programme and its efforts to garner the resources needed for its operational arm as well as the many service Commissions and agencies which the Organisation expects to begin rolling out across the Region over the next few months.

Speaking of the historic appointment, the EAC’s long-serving Secretary General, Bishop Emerson Boyce described it as “one of several major moves that the Association will be making in our drive to fulfill the outcomes contained in our Roadmap 2023 Strategic Plan”.

Mr. Boyce continued: “Clovis has been integrally involved in the EAC’s revitalisation plans which began a few years ago and brings with him a level of passion, knowledge and experience that will serve us and our stakeholders very well as we roll out the tremendous programme that the Lord has given us for transformation of our Caribbean Region”!

The Evangelical Association of the Caribbean (EAC) is headquartered in Trinidad & Tobago and is an affiliate of the World Evangelical Alliance (WEA), located in New York. The EAC’s mission is to unite Caribbean Evangelicals in purpose, voice and action to disciple our peoples and extend the Kingdom of God across the Caribbean.

The EAC joins with the European Evangelical Alliance (EEA) in condemning the violation of international law by Russia and calling for an immediate end to the attacks on Ukraine. Together, we call for respect to the Ukrainian territorial integrity, an end to the hostilities, an immediate ceasefire and withdrawal of Russian troops from Ukraine.

Commenting on the continuing situation, Thomas Bucher, General Secretary of the EEA, said, “Both Russia and Ukraine are sovereign nations, having the right to live without fear of attack but also having a duty to live peaceably as neighbors. Given the political and military developments over the past several years, each side may perceive the other as a threat but there is absolutely no justification for the Russian government to continue its interference in Eastern Ukraine or even start an invasion.”

The invasion of Ukraine is both unjustified and unprovoked. Europe has witnessed the horrors of war in the past and has learned that armed conflict and military occupation only bring devastation and suffering. Let us pray for peace between Ukraine and Russia amid the increasing tensions.

The Regional Board and members of the Evangelical Association of the Caribbean (EAC) join with the South Pacific Evangelical Alliance (SPEA), the New Zealand Christian Network and the Evangelical Community of New Zealand, to extend their prayerful support to the family and loved ones of Glyn Carpenter on his passing.

Rev. Emerson Boyce, Secretary General of the Evangelical Association of the Caribbean (EAC) commented: “Glyn, as he was affectionately called was a confident, humble, caring and an intriguing servant who changed the landscape of Christian service among the WEA Regional General Secretaries. He served as the National Director of the New Zealand Christian Network to 2017, and Regional General Secretary of the South Pacific Alliance up to 2019. Glyn was indefatigable in his service for God, possessing an affable personality, and a heart for Christians to work well together, which will be hard to replace among his colleagues, who will dearly miss his forever–smiling face. He leaves behind a legacy of influence in the lives of countless people across New Zealand and the South Pacific.”
We praise God for the Spirit–controlled life, ministry and legacy of Glyn Carpenter. We are praying for his wife, Christine of 39 years, their three sons and grandchildren, family and friends during this difficult time.

We praise God for the Spirit–controlled life, ministry and legacy of Glyn Carpenter. We are praying for his wife, Christine of 39 years, their three sons and grandchildren, family and friends during this difficult time. 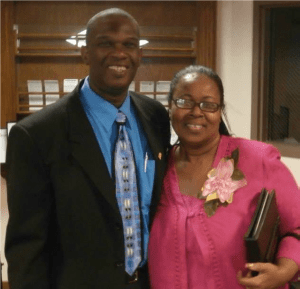 Rev. Emerson Boyce, Secretary General of the Evangelical Association of the Caribbean (EAC) commented: “Pastor Martin, as he was affectionately called was a confident, humble, and an intriguing servant who changed the landscape of Christian service in the All Saints community. He served on the Board of Directors of ABEA as President and up to the time of his passing Director of Relief and Development. Rev. Martin was indefatigable in his ministerial service for God whom he loved dearly and leaves behind a legacy of influence in the lives of countless people across Antigua and Barbuda, within and outside the Caribbean.”

Mr. Clovis St. Romain, General Secretary of ABEA recalls Rev. Martin “as being humble and caring, possessing an affable personality, which will be hard to replace among colleague Ministers and friends who will dearly miss his forever smiling face.”

We praise God for the Spirit–controlled life, ministry and legacy of Rev. Martin.  We are praying for his wife, Sandra of 39 years, their children Josiah and La Fleur, grand children Josiah, Jr. and Raina, family and friends during this difficult time.

Rev. Emerson Boyce, Secretary General of the Evangelical Association of the Caribbean (EAC) commented: “Sir Lester Bird, a great son of the soil, contributed significantly to the socio–economic development of Antigua and Barbuda. Caribbean leaders acclaim as the architect of modern Antigua, responsible for successfully transitioning the country from an economy dependent on a defunct sugar industry into one of the leading tourism centres in the world.”

Under his stewardship, Antigua and Barbuda became a high–income country, transforming the quality of jobs, housing, and introducing high–end tourist resorts.

He was a keen sportsman, with a great passion for cricket and a superb pace bowler. He represented Antigua and the West Indies and won a bronze medal for long jump at the 1957 Pan American Games.

Sir Lester, a committed regionalist, was highly instrumental in establishing the Organisation of Eastern Caribbean States (OECS). He was a great orator and a progressive thinker whose vast experience and political knowledge served the people of the Caribbean well in the councils of CARICOM.

We are praying for his family, friends and the nation of Antigua and Barbuda during this difficult time.