Residents of St. Vincent and the Grenadines and the nearby islands woke up to the news this morning that the erupting La Soufriere volcano had experienced its most dramatic eruption yet in the wee hours of Monday 12 April, sending pyroclastic flows tumbling down the eastern and western sides of the mountain for the first time. It was not the kind of report that the weary citizens of these southern Caribbean islands had hoped to hear.

Already struggling to cope with the devastating impact of thousands of tons of ash that had buried roads, smashed through roofs, ruined water sources and covered almost the entire country in a greyish-tan blanket of destruction up to a foot deep in some places, this new phase of the eruption had the potential to obliterate the villages which lay along the foothills of the mountain. This volcano’s fury was going to bring them to their knees.

In the neighbouring island nations of Barbados and St. Lucia, residents were trying to make sense of the ashfall they were witnessing from a volcano that was hundreds of miles away. The grey stuff that had drifted into their airways covered everything that was exposed, rooftops, roadways, sidewalks, cars, trees, fences. The air and sky over parts of Barbados were so densely permeated with the ash that motorists were forced to use headlights from as early as 3:00 o’clock in the afternoon on Sunday! The day’s rainfall had caused the dusty ash to transform into a heavy, dark grey goo which clogged drains, ruined surface water catchments and activated respiratory diseases all across the island of 300,000. The already bad situation was becoming worse.

Back on St. Vincent where up to a fifth of the population were now crowded into hastily arranged shelters or at the homes of friends and relatives in the south of the island, it was clear that this disaster had not reached its climax. And even as a tearful Prime Minister, Dr. Ralph Gonsalves expressed his government’s appreciation to the other Regional Governments which had pledged support in the forms of housing, food supplies and money, displaced residents began feeling the pinch of limited water, sanitary and sleeping supplies. There was also the underlying fear of a health disaster as Shelter Managers worried about the impact of a possible Covid-19 outbreak within their shelters.  Collectively, this nation of 110,000 residents was holding its breath.

EAC Connect spoke about the situation at the Shelters with Dr. Roanne Harry, a member of the Christian Response Mission Team which had come together to coordinate the work of the Church and other interested NGO’s, “We have been doing a lot of work with the Families in the Shelters where the needs are greatest and the biggest need is water, for drinking, cooking and other basic sanitation purposes. While people had pre-packed some amount of clothing because of the period of notice provided by the volcano since December last year, they did not pack enough things like towels, wash cloths and sheets, so these items are in great demand. Canned food and food products are in critically short supply. The truth is that people have bought out everything on the shelves in the supermarkets. The only thing on most shelves is a film of ash”.

Added Dr. Harry, “Families with young children are especially impacted by the situation in the shelters. As a mother myself, I am worried that their young minds will struggle to process the chaos around them, the need to remain indoors in new and strange places and the fear of this sea of people who now suddenly occupy their living space. As you can imagine, that is a whole new and important aspect of this one disaster that has spawned so many other potential disasters in its wake”.

One of the issues being addressed by the authorities on the ground is the effort to reach residents of the Red Zone who should have evacuated but who had decided to remain to protect their livestock from poaching which had occurred after the 1979 eruption of La Soufriere. With roads now barely passable due to the sludge from the ash covering and with raging water flows at areas in Overland and Dry River, evacuation efforts have now escalated to rescue efforts involving the Special Services Unit of the military.

Dr. Roanne Harry stressed the gratitude of the members of the Christian Response Mission Team on the ground in St. Vincent to those persons and organizations in Trinidad and Barbados which have sent Supplies and which are mobilizing to send more in the coming days. She said, “We have had Supplies shipped to us via the Barbados and Trinidad Coast Guard Services and there is currently a Ferry collecting Supplies in Barbados to bring here. Our hearts go out to our Partners and Friends who continue to support our efforts to bring relief to those who have been dislocated by this disaster. Thank you!”

Join the EAC Community to Pray for St. Vincent & the Grenadines 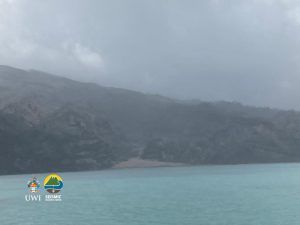 Copyright © 2021 Evangelical Association of the Caribbean